Insane Clown Posse have unveiled their official music video for the track “Explosions,” featured on their recently released album The Marvelous Missing Link (LOST). The video premiered exclusively at VICE yesterday, and can be seen HERE. The Marvelous Missing Link (LOST) is the first “Joker’s Card” release since 2012’s The Mighty Death Pop!, and the new album’s second installment (FOUND) will be released on July 28th.

“This new album is unquestionably the most direct and in-your-face Joker’s Card we’ve ever released,” the band told SPIN in a recent interview. “The Marvelous Missing Link (LOST) challenges the listener to consider the importance of faith in their life and how they are truly Lost without it. This record dares you to think about the big issues in your life…while at the same time delivering the ruthless Detroit wicked shit that the world has come to expect – and fear – from the Insane Clown Posse.” 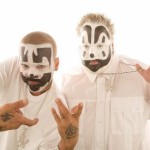