Philadelphia emcee and Top Tier Battleaxe Warrior, Adlib has officially signed with Battle Axe Records and Faction Entertainment for the release of his upcoming new studio album “Primitive Tomorrow” in early 2017. The album will feature guest appearances by Demrick, Tabs, and TeamBackPack MUNY 2016 Champion Ren Thomas. “I’m extremely excited and thankful for the opportunity to release a project with a team I respect and believe in. Madchild has been a crucial part of my growth as an artist, his work ethic is an inspiration and on a personal level I’ve learned a lot from him over the years and appreciate the love he has shown me,” commented Adlib. “We approached this album a little different. We have multiple producers on every track so sonically this album is leagues beyond any project I’ve been apart of. Rob the Viking understands my vision and was able to bring it to life. The message I want listeners to take away from the album is to think for yourself, break rules, question everything and to spread love.” Adlib also added, “Working with Kevin Zinger is bucket list shit for me, because he is someone that I have a lot of respect for. He has built brands from the ground up and has done things his way without conforming. He’s always put the art first, so it’s an honor to have him in my corner and believe in the project.” The track listing for Adlib’s “Primitive Tomorrow” is as follows: 01 – Primitive Tomorrow feat. DJ TMB 02 – Up! 03 – Peaking in Babylon 04 – Rebel Hippies (Light it Up) 05 – Sign Language feat. Demrick 06 – Tim Leary feat. Tab 07 – Every Soul Goes Free (Smoke Break) 08 – All I Ever Had 09 – Work feat. Ren Thomas
10 – Sensi Starr 11 – Touch of Grey 12 – P.E.A.C.E. feat. Jessica Lamb Adlib broke out onto the scene in 2013 when he signed with Chambermusik Records for the release of his debut album “Bad Newz”. His raw style of hip-hop was a nod to the forefathers that come before him like Jedi Mind Tricks, Army of the Pharaohs, and Vinnie Paz, but his aggressive delivery mixed with counter-culture lyrical topics allowed him to connect with misfits, outcasts and underground hip-hop heads from all walks of life. He dropped his sophomore effort “The Highway” in 2014 and then followed it up with 2015’s “Teenagers From Marz” EP. The later was collaborative effort between Adlib and Rob The Viking from Swollen Members, and it cracked the Spotify Top 100 in Hip-hop in Canada up.

Adlib is also one of the faces and leaders of the Battle Axe Warriors movement, which now has over 5,000 documented members across the globe. The Philadelphia native is an advocate for the cannabis movement with sponsorships from illadelph Glass and Ziggi rolling papers that manufacture and distribute Adlib’s Rebel Hippies Rolling Papers. 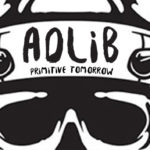