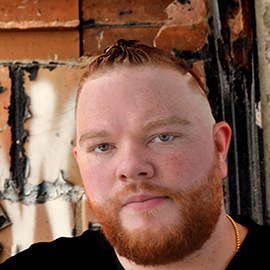 North Jersey’s Ren Thomas is breakin’ on the scene in a big way, but don’t get it twisted, he been nice. Formerly known as Renagade, this 80’s baby has embodied the essence of the Brownsville era with a progressive team of producers bringing his craft to the next level. Leagues beyond where he’d imagined when he first explored lyricism and writing at the age of 10, Ren is an accomplished battle MC with Canadian (2015) and West Coast (2016) tours under his belt, not to mention his extensive catalogue of bangers. Ren is clearly resetting bars with bars on an international soundstage.

Ren Thomas built a preceding reputation as an unrelenting battle MC, recognized as a Ludicris’ Magnum Live Large Semi Finalist (2012), EOW USA Champion where he placed 3rd worldwide (2013), and EOW USA Runner Up (2015). In his most recent victory, he beat out hundreds of competitors spanning the furthest reaches of the globe to take the TeamBackPack 2016 Cypher Championship at MUNY’s (Mission Underground New York) annual conference in Bushwick this summer. Steady contender in battle leagues including GrindTimeNow, iBattle Worldwide, The Draft League, and BlockCityTV have kept this budding artists in the forefront of the battle rap community’s brain for the better part of a decade.

Title single ‘I Been Nice’ produced by Pete Rock off his upcoming LP premiered on Shade 45 where Ren has been active on Lord Sear’s cyphers. He backed up his banter with a stand out performance on Sway’s ‘Sway in The Morning: Friday Cypher’. Continually standing up to stand out opportunities, Ren is clearly a “beast to be reckoned with.”

With years invested, countless mixtapes and performances, Ren fully committed to his artistry with the release of his 2011 debut ‘The Decline of Western Civilization’ but his solo 2014 LP ironically titled ”Who The Fuck is Ren Thomas?” that catapulted him to starr status. Ren then exhibited his ability to embody and stylistically emulate a broad range of iconic figures in hip hop while maintaining personal integrity with his 2015 release ‘Raised By The Drum’. Collaborative EP ‘Don’t Be Mad’ with Sensi-Starr brother Skrewtape dropped later that year.

No rest for he wicked in Ren Thomas’ world, he’s broadening his reach, recording with long time collaborative partner Tab (Dead Poets) under the group name Black Velvet Alibi with an EP coming soon. LP ‘UPS is Hiring’ is in the works with Skrewtape. 3 part EP series ‘The Renaissance’ (prod. Nemisis),  ‘Renovation’ (prod. Level 13), and ‘Renowned’ (prod. Expo) will be released in sequentially over 2017.  Highly anticipated release of ‘Lord Sear Presents: I Been Nice’ is mastered and ready to be released in the 4th quarter. With an extensive catalogue, heavy resume and growing list of accolades Ren Thomas is undoubtedly one of the top contenders in the underground hip hop community.