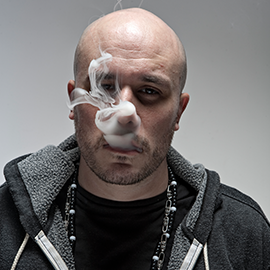 Joshua Hemingway, a.k.a. J.O. The Last Man, is a Philadelphia-based emcee and part of the Freedom Union collective, which includes Adlib and Godilla. J.O. is an official “Battleaxe Warrior” member known for his complex rhyme patterns, sneaky wordplay, and his ability to paint vivid and elaborate pictures of his street tales.

“Put a rotten apple in a bag of fresh fruit/and see what happens’… That’s how my album starts out, and that’s how I want to be remembered. I’m here to dirty this shit up a little.” – J.O.

In recent history, fans may remember J.O.’s work as a member of The Uncanny. His early 2014 solo debut album, The Mushroom Chronicles VI, released via Sensi-Starr Records, features a diverse batch of Hip-Hop’s finest, such as Reef The Lost Cauze, Chief Kamachi, Burke The Jurke, King Magnetic, The Uncanny, and more.