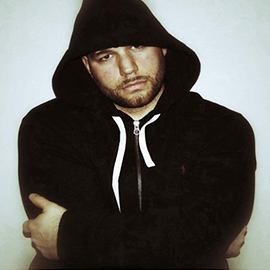 “These are my subconscious thoughts in rhyme form with a melody behind it.”

South Philadelphia’s essence leaks out of every pore in Burke the Jurke’s body and shines through the aura surrounding his tall, chiseled frame. Growing up in a low income, mostly Italian neighborhood with a tumultuous home life, Burke used this adversity to build character. His father got him interested in music by taking up various instruments up in 5th grade, as an attempt to keep him out of trouble. Growing up in a rough and tumble urban environment with a passion for music, it was inevitable that hip-hop would make its way into Burke’s life. After a couple of years writing rhymes and some convincing from his big brother, Burke hit the ground running at age 15, gaining a name for himself with his precise, sharp style influenced by legends like Big Pun, Busta Rhymes and The LOX. While the “Jurke” handle, a clear play on his last name, was inspired by a negative side of Burke brought on by his own inner demons, it has evolved into a sarcastic term of endearment used by fans, friends and family alike to describe a talented artist on the rise taking out any obstacles in his path.
If you’re a self respecting hardcore hip-hop head, Burke the Jurke’s resume speaks for itself. The man has released collaborations with Sean Price (who once referred to Burke as “fire” in an interview before even meeting him), Vinnie Paz, Slaine, Rustee Juxx, Reef the Lost Cauze, and more. He has done shows with luminaries such as the Wu-Tang Clan, Jedi Mind Tricks, Action Bronson, Company Flow, Termanology, and Boot Camp Clik to name a few. He’s released three full length LPs (“The Demolisten” in 2007, “Jurke de Soleil” in 2012 and “Ear Responsible” in 2014), all increasingly more acclaimed by critics and fans alike. What excites Burke the most though, is not his past accomplishments; rather it is his future. His next album “Know Alternatives” is set to drop in July 2015 on Sensi Starr Records, and it contains the emcee’s most progressive music to date, showing a side of Burke that hasn’t been seen as much in his work yet. As Burke himself says to his fans, “if I’m growing as a person, why the f*ck can’t you?” Any great artist is not afraid to challenge his fans, new and old, to grow with them. Burke the Jurke is clearly on the right path towards joining the elite ranks his influences laid before him.