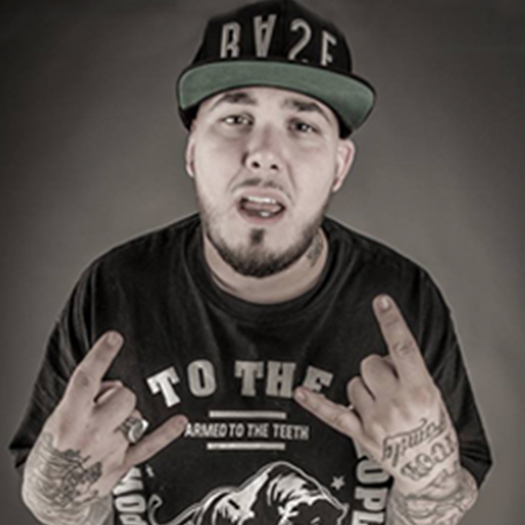 Adlib is an internationally known Hip Hop artist from Philadelphia, Pennsylvania.
He has been building a loyal following with his high-energy show, relentless tour schedule and stellar reviews for his independent releases.

His raw style of blue collar and counter-culture topics act as a soundtrack for the misfit, outcast, weirdo and outsider.

The HighWay LP and Teenagers from Marz EP were released on the independent label Sensi Starr, both were well-received. T.F.M. also placed in New and Noteworthy on ITunes and charted on Spotify Top 100 Hip Hop in Canada.

T.F.M. was solely produced and mixed by Rob the Viking of Swollen Members and was also released on limited color vinyl.

Adlib has been featured on songs with Grammy award winning and Platinum selling artists, as well as some of Underground Hip Hops elite such as: Travis McCoy, Doodlebug of Digable Planets, Vinnie Paz, Madchild, Slaine, ILL Bill, NiNe, Shabbam Shadeeq, UG and more.

Besides headlining tours throughout the US, Canada, and Europe, Adlib has toured with: Jedi Mind Tricks, Heavy Metal Kings, AOTP, Madchild and Danny Diablo.

Adlib is one of the main faces and controllers of the Battleaxe Warriors movement. He is a well-known Cannabis advocate and is the only artist sponsored by Illadelph Glass. He also has an endorsement deal with Smokers Excellence distributing Adlib’s premium rolling papers “Rebel Hippies” manufactured by Ziggi.