ADLIB Featured Article, PRESS 0 Comments
Burke The Jurke – FreeOnSmash Video premiere for “Don’t Mean Nothing”:
http://freeonsmash.com/music/burke-the-jurke-dont-mean-nothin-music-video/
Burke The Jurke – Don’t Mean Nothin’
By Street Hustla   September 8, 2015
ARTIST: BURKE THE JURKE
SONG: “DON’T MEAN NOTHIN’”
PRODUCER:
ALBUM: KNOW ALTERNATIVES
DIRECTOR: JIMMY GIAMBRONE
The last time Burke The Jurke made his rounds on the site was with the debut of his music video for “Fork In The Road” and today, we’re thrilled to premiere yet another video from the South Philly native. In the video for “Don’t Mean Nothin,” directed by Jimmy Giambrone, Bruke takes a trip to Atlantic City with some of his crew for some fun in the sun, where he reflects on life and puts all the negativity behind him while he enjoys himself.
His new album, Know Alternatives, is available on iTunes now.
OS REWIND: Burke The Jurke – Fork In The Road
watch video
0
Share on Pinterest 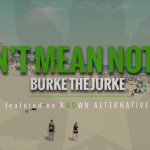