Potluck Release Kottonmouth Kings Diss Track “Down With The Crown” 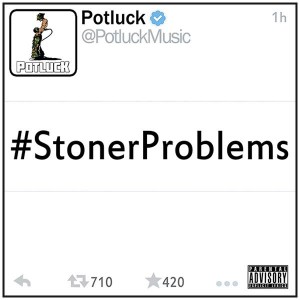 Potluck have released a shotgun blast diss track at thier former labelmates the Kottonmouth Kings in the form of a new diss track called “Down with the Krown” from the group’s new mixtape album “#StonerProblems”. In the track Potluck allege that KMK tried to pay someone to write a diss track for them about Potluck, that Brad X is racist, and that they can’t rap. The also gave an exlusive interview to HipHopDx.com where they said Brad X is fake and doesn’t even smoke weed:

“We’re out there on the road with him for three months in a row and he doesn’t smoke no weed at all, which is fine if you don’t want to smoke weed,” 1Ton says. “But don’t call yourself a Kottonmouth King and then you go three months on tour talking about you’re getting high everyday and partying and you don’t even smoke weed one time. He felt threatened that we were coming from the legitimate place and what we were talking about was real and what they were putting out was phony. I felt like he always felt threatened by that, whereas me and UnderRated, we never felt threatened from them. We felt like, ‘Yo, you guys must be amazing at doing business because look at what were able to accomplish and you guys aren’t really about any of the shit you’re talking about.’”

Check out the track here: 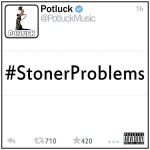