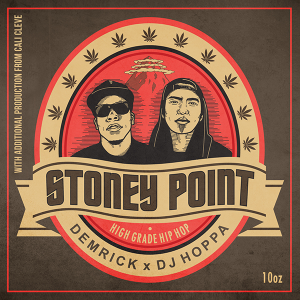 Demrick and DJ Hoppa have announced their collaborative project “Stoney Point”, which drops digitally on June 9th and is backed Funk Volume, Battle Axe, and Broken Complex, via EMPIRE Distribution. While details on the project are yet to be revealed, the duo has released the project’s first single, “Nobody’s Safe”, featuring Funk Volume’s own Jarren Benton and SwizZz, along with Battle Axe spitter Madchild. Listen below:

Demrick & Hoppa are also set to embark on Dizzy Wright’s “The Growing Process” Tour starting May 29th through the first week of July, where they will be performing songs from “Stoney Point”.

Los Angeles bases emcee Demrick, formerly known as Young De, rose through the ranks of the hip-hop scene when his mixtapes “Audio Hustlaz Vol. 1” and “Homeland Security” ignited the internet. Since then, Demrick has continuously raised the bar as a lyricist collaborating with high profile artists such as Xzibit, Kurupt, Snoop Dogg, B-Real, Royce Da 5’9, Crooked I, Freeway, Too $hort, and Cypress Hill. In 2013, Demrick was invited by B-Real and Xzibit to join them in the formation of a new super-group dubbed the Serial Killers, and they released their now classic “Serial Killers Vol. 1” album on Halloween. Demrick’s solo debut “Losing Focus” was released through Battle Axe Records and features collaborations with Dizzy Wright, Logic, B-Real from Cypress Hill, and Xzibit.

Whether sampling other artists or composing his own beats, DJ Hoppa has an innate sense of groove that never comes across as manufactured or mechanical. He borrows sparingly and delivers tastefully – never running classic tracks into the ground, but presenting them as gentle reminders of the better days, back in the day. Finding like minded individuals in his hometown, DJ Hoppa developed a growing and prosperous Hip Hop scene in the San Fernando Valley through his label Broken Complex, a thriving imprint specializing in Indie Hip Hop, DJs, and Roots Reggae releases and events. It was through these efforts that Hoppa was noticed by Funk Volume, and joined their artist roster and is the current touring DJ for Hopsin, SwizZz, and Dizzy Wright. His debut solo album DJ Hoppa’s “Hoppa and Friends” was released on Funk Volume in early 2015 and features tracks with Hopsin, Dizzy Wright, Jarren Benton, SwizZz, R.A The Rugged Man, Wax, Chris Webby, and more. 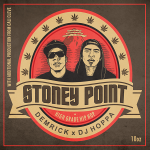