Live Fast: Hey guys, thanks for taking the time to chat. Want to introduce yourselves?

Rob The Viking: What up, I’m Rob the Viking: Swollen Members, Battleaxe Warriors

So you guys are here at Blue Light (Studios), working on some new material, some new stuff?

Ad: Yeah I reached out to Rob, he did some production on my last record The Highway, and really the beats that he had sent for The Highway kind of set the foundation for the whole like direction that I went with that record so I knew right away that I wanted to work with him – A big fan of his production. But I didn’t really want to jump the gun you know? So I waited until those songs were done and sent them to him to see if he liked what we did and he did so thats why we are here now. 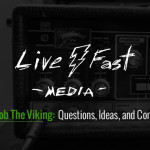